Whenever you're recording instruments directly, rather than through a mic, you'll get better results using a DI box rather than plugging directly into your audio interface. If you're unsure which DI Box is best for your home recording situation then read on...

Although the recommendations I've provided below are from the perspective of recording, I've presented versatile direct input boxes which can be used for live performance as well.

If you're not even sure about whether or not you need one for recording then read Do I need a DI Box to record with an Audio Interface?.

Skip directly to the type of DI box you're interested in:

When recording electric bass you'll find the results will sound much better with a DI box - the resulting tone will be more organic, less choppy, rounder and fatter. If you're recording a bass player with a wide dynamic range then you might want to consider using a compressor as well - slap bass is a good example of this. If you'd like to learn more about recording bass then I recommend this article on SOS.

This extremely versatile DI is my favorite for bass - it has three different settings which allow you to plug it directly into your audio interface, PA desk, and even power amps - when you're setting up your studio on a limited budget it helps to have great gear which can be re-used in multiple roles and settings.

When it comes to recording it does a great job with all styles of bass playing from standard rock through to slapping funk, and it's even great for distorted bass sounds. It also contains a tube amp emulation circuit which can be activated via it's foot switch - you can also blend the emulation and direct sounds together with the blend knob.

It really lives up to its name - you can get an extremely wide range of sounds without the need for multiple bass amps or modeling software. However, if you do want to record a direct signal and mic a bass amp at the same time, then you can achieve this with its parallel output setting which delivers a clean sound directly to your amp.

It usually sells for around $199 - Buy it or get more information at Tech 21. 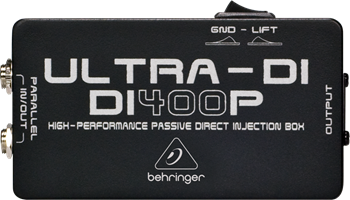 If you're on a really tight budget then the DI400P from Behringer, which usually sells for about $20, will get the basic job done of taking your bass signal directly into your audio interface at the appropriate impedance level and with a balanced signal to reduce cable noise.

It has a Thru/Out jack which lets you send a balanced signal to your audio interface or PA console while allowing you to send a standard signal to an amp at the same time.

Although it's a passive DI, it has a ground lift switch to prevent hum associated with ground loops - this is particularly useful when using it at gigs.

Although I'm still a bit of a purest at heart in that I prefer to capture guitar performances using mic'd up amps and the sound of the room, it has become extremely popular to record guitars with direct input so that you can apply various amp and cabinet simulations later - a process you can call "virtual reamping". If you want more detail on different processes for recording guitars Recording Magazine has a great run down on the topic here.

Particularly when it comes to overdriving a tube amp I personally feel that the physical feedback and resonance between the amp & strings is something that is hard to reproduce later in post production - think of the sounds Jimi Hendrix used to create. That said, I'm not a guitar recording snob and you should use whichever recording technique works best for you.

A good DI box will give you the option to record electric guitars any way you want.

When it comes to directly recording clean electric guitar then my pick is the J48 MK2 active DI box, it can also be used to run an electric or acoustic guitar directly into your mixing console for live performance (provided that the console has phantom power).

It also works great for recording acoustic-electric guitars. But you don't just have to take my recommendation that this is a quality piece of gear, Tommy Emmanuel said, "I love my Radial J48 direct boxes! They produce a big, fat and clean signal that is so good, they are the ones I use for my live recordings."

Jimmy Messina also sings the J48's praises, "I use Radial gear in my studio on a daily basis and I'm here to say it performs flawlessly!"

Every electric guitarist review I've seen of this for recording has said it produces the best sound regardless of whether they were reamping, or applying virtual effects, and in my opinion I have to say it's well worth the money if you're serious about recording.

It usually sells for just under $200 - Buy the J48 MK2 or read customer reviews at Sweetwater. 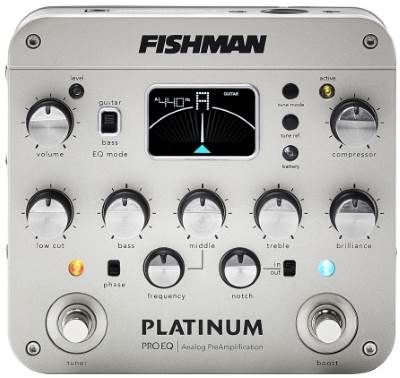 This exceptionally versatile DI is actually a DI, EQ, Preamp and Compressor all in one very warm sounding analog-only unit.

The EQ is one of the really impressive features of the Platinum Pro; in addition to having 5 bands it also sports a sweep function for the mid range and you have the option of bypassing the EQ to the balanced XLR output.

The single knob for the compressor makes it easy to even out your sound without getting too complicated - great for live use and you can always use additional compressing/limiting if you require more precision when recording.

It sells for $249 - Get more information at Fishman.

Here are some tips for recording acoustic guitar and vocals together.

For the Budget Conscious

Once again, if you're on a tight budget just go with the $20 Behringer Ultra-DI DI400P which I described above in the bass section.

For any type of stereo electronic instrument such as keyboards, digital pianos, electronic drums etc., you're going to need a stereo DI box.

Because electronic instruments are already putting out an 'active' signal, you don't need any boost. This means a passive DI is perfectly suited to the job - you just need to get the impedance correctly matched to the input of your audio interface or mixing console while ensuring you don't introduce any cable noise - this is exactly what your stereo DI box will do.

In fact you generally want to avoid using an active DI in this case, otherwise you're quite likely to run into problems with unwanted clipping and distortion.

You can tell the ProD2 was developed by experienced musicians/engineers - they understand that different electronic instruments have different levels of output (regardless of what the specs might say) so they've added a -15dB PAD switch on both channels - if you notice any clipping simply hit the buttons. The reason for having a separate one on each channel is that sometimes you might want to use it as two mono DI boxes and run each channel independently. As an added benefit this means you can also use it with guitars and bass.

Both channels are fully isolated - this includes the two Eclipse ET-DB2 transformers which provide 20Hz to 20kHz performance with less than 1.5dB deviation above 18kHz.

The ProD2 is used by some impressive people including Alan Parsons, Nigel Hopkins, Steve Smith and Joey DeFrancesco.

Learn more about the ProD2 at Radial Engineering.

If you want to keep the cost down then the DIR-2 is quite an acceptable alternative to the Radial ProD2 - the DIR-2 usually sells for about $60.

Although I haven't had the chance to get up close and personal with one of these myself, Elite Core do produce some pretty good snakes so I'm confident their DI box should be of reasonably quality, and it's in the top 40 best selling list of all DI's on Amazon.

Get more information at Elite Core.

If you have any comments or questions please let me know via the contact form.