Winner of the 29th Annual TEC Award - this is without doubt currently the best FireWire interface currently available in its class. 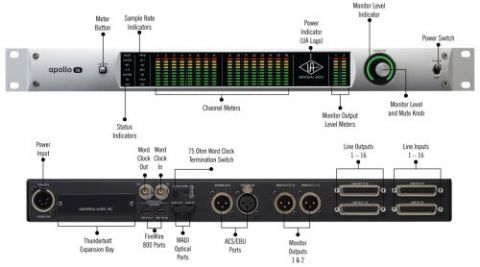 Just like the much more affordable AudioFire 12, the Apollo 16 is designed for use in studios where you already have your own mic preamps and DI Boxes for capturing the analog audio, then you send the signal to the Apollo 16 to digitize it.

However, Universal Audio have developed the Apollo 16 with higher end studios in mind - it has a street price of $3,000 but it packs in the features that justify this level of investment.

Along with its FireWire connectivity, you also have the option of installing a Thunderbolt Option Card for connecting to Mac computers or next-generation PCs which will give you about 12 times the bandwidth of FireWire. This allows you to connect multiple devices in series including hard drives, processors, and extra computer displays. But most importantly, Thunderbolt lets you run more UAD plug-in instances with reduced latency - perfect for Pro Tools users. The Universal Audio Apollo Thunderbolt Option Card sells separately with a street price of $500.

But you don't need Thunderbolt to run a large number of UAD plugins because the in-built Real-time UAD-2 QUAD card provides less than 2ms of latency - this feature is also available when mixing and mastering. Works with major plugin protocols - VST, RTAS, and AU, and UAD has some brilliant analog emulating effects from from Ampex, Lexicon, Manley, Neve, Roland, SSL, Studer, and more.

This comes bundled with the interface, and one of the features I really like are the 4 cue sends which you can route to any 4 pairs of stereo outputs on the interface, you can then route those to your headphone amps. The companion Console Recall plug-in let's you instantly recall not only any of the interface settings, but also the Realtime UAD plug-in settings within your DAW. It also has AUX and CUE sends, as well as insert points on every channel.

It also has MADI in and out ports which allows you to chain two Apollo 16s together for a total of 32 I/O channels. When you chain two together, the console software automatically expands to 32 channels so they work together as a single virtual 32 channel audio interface.

For high-end home studios and mid-level professional recording studios, you won't find a better sounding, more flexible audio interface in this price range - and it has the award to prove it!

Get the current discount price at Amazon