With 18 channels in and 20 channels out, the Scarlett 18i20 is currently the best value audio interface available in the sub $500 price range.

On its own it will allow you to record via 8 analog channels simultaneously, or you can use the optical lightpipe ADAT connection to hook it up to another 8 channel interface and record simultaneously with an additional 8 channels at 48kHz or 4 extra channels at 96kHz.

The 18i20 is ideal for recording drum kits with the 8 channels allowing you to keep the neccessary separation of tracks for post production and mixdown - the same goes for those times when you need to record multiple singers and instruments simultaneously.

It comes with the famous Focusrite pre-amps which produce a clean uncolored tone and allows the characteristics of your condenser microphones to shine. The only minor downside of the inputs is that phantom power can only be turned on and off in the 2 blocks of 4 channels - 1 through 4 and 5 through 8. Usually it won't hurt to send phantom power to a mic that doesn't use it, however I wouldn't have a ribbon mic plugged into one of the banks that has phantom power on.

The input configuration has been well thought out with 2 of the 8 balanced combination XLR/TRS inputs on the front - when that's all you need you don't have to keep reaching around the back to plug and unplug. The two inputs on the front are also instrument inputs so you don't have to have a DI box to record guitar and bass directly in (although I still prefer to use my trusty DIs). The two independently controlled headphone outputs are also on the front with their separate volume control knobs.

One handy thing about the USB 2.0 connection is that I can't find anyone who's had a problem plugging it into a USB 3.0 port on their computer - this is important for anyone who has a newer computer that only provides USB 3.0. 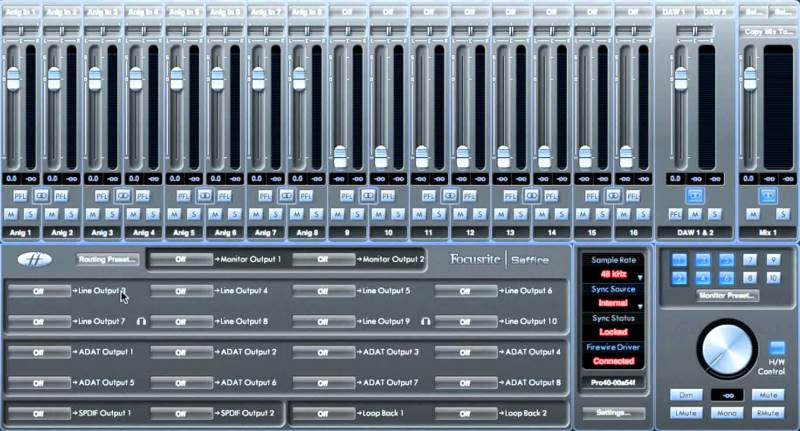 Scarlett MixControl (pictured right) gives you a massive amount of control over the 18i20 allowing you to route almost any input to any output.

You can have completely different sub-mixes going to each of the headphone outs and to the studio monitor outs as well.

If you have a headphone patchbay already in your home studio, you can even create 4 separate sub-mixes for that using the line outs on the back.

Of course you can also route any channels from your DAW to any of the outs or sub-mixes as well.

If you're ready to step up to 8 channels of simultaneous recording then the Focusrite Scarlett 18i20 has the best price/performance ratio while allowing you to make professional level recordings suitable for any kind of public release.

Get the Scarlett 18i20 now or read customer reviews at Amazon