With all the options currently available it can seem a little daunting when you're looking for an inexpensive audio interface to record music - you want as many features & options as possible without sacrificing too much on quality.

The good news is that there are some quite respectable interfaces available for desktop and laptop computers which you can buy without breaking the bank, and this roundup should help you decide which one to buy.

When it comes to audio interfaces under $200, there is nothing better than the Scarlett 2i2 in my opinion. It offers 24-bit / 96kHz recording and has two dual sockets into which you can plug either XLR or ¼ inch TSR jacks. Both channels have phantom power so you can use it with high quality condenser mics and you can switch them both between line/mic level and instrument level for guitar and bass. It has both monitor and headphone outputs with zero latency direct monitoring, and it connects to your computer via USB. The 2i2 is compatible with Windows 8, Windows 7, Windows XP, and Mac OS X 10.6.5 or later.

For further details see our full Scarlett 2i2 Review or the Customer Reviews on Amazon.

The M-track and the iO2 Express are essentially the same audio interface marketed under different brands. It provides 24-bit depth but unlike the 2i2 above it only supports up to a 48kHz sampling rate, however this is certainly good enough for most home recording studios and it's generally about $50 cheaper than the 2i2. It also accepts both XLR and ¼ inch TSR jacks and has phantom power on both input channels and both can switch between mic/line level and instrument level. One advantage it has over the 2i2 is that is has both MIDI In & Out sockets so you can control external synths if you prefer not to run all your instruments inside your DAW.

See our complete M-track Review or the Customer Reviews on Amazon.

As an independent company Steinberg were known as one of the leading music production software companies, and now that they're owned by Yamaha they're also becoming a very good music recording hardware provider as well. This 2 channel in/out audio interface converts audio to digital at up to 24-bits / 192kHz and both channels accept XLR & TRS inputs with phantom power and line/mic to instrument switches on both. It also sports the same D-PRE mic preamps that Yamaha use in some of their high-end equipment. One thing I quite like about the UR22 is that the real-time monitoring can be mixed separately for headphones and your monitor speakers. The UR22 is also solidly built and encased in a metal casing - perfect for mobile work like recording live gigs.

For more information see the Customer Reviews on Amazon or visit Steinberg. 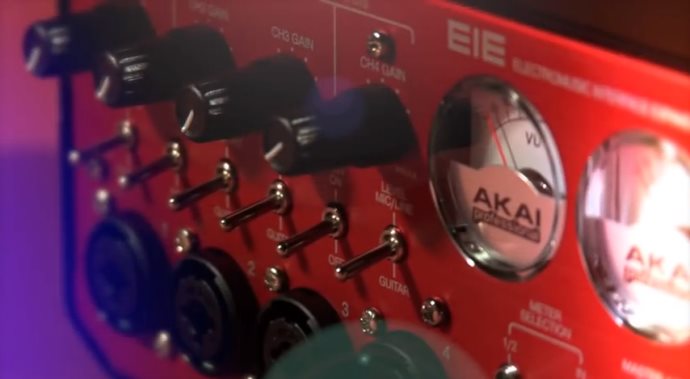 Although slightly more expensive than the other audio interfaces above, the EIE Pro makes up for the small additional cost with an impressive feature set which begins with the fact you can record 4 channels simultaneously. All four channels have phantom powered dual XLR & TRS nickel-plated inputs and can record at up to 24-bit / 96kHz - all four channels can be switched between Mic / Line / Guitar level.

I really like the old style twin 'analog' VU meters on the front and a standout feature is the four inserts on the back which you can use for external effects. I've seen the EIE Pro being used successfully in a variety of settings from home studios to live recordings. With 4 outputs you can run 2 sets of monitor speakers in addition to one set of headphones for monitoring. It also acts as a USB hub with three ports on the back allowing you to plug in additional peripherals like hard drives or even a camera for simultaneously capturing video.

Overall this offers the best value of all the cheap audio interfaces in this roundup, so if you have a few extra dollars to spare and would like to have the additional flexibility of 4 channels, then I recommend buying the Akai EIE Pro!

For more information see the Customer Reviews on Amazon or visit Akai.

As you can see you don't need big bucks to get great sounds captured in your home studio - these cheaper audio interfaces will do just fine for most musicians.